“When nineteen-year-old huntress Feyre kills a wolf in the woods, a beast-like creature arrives to demand retribution for it. Dragged to a treacherous magical land she only knows about from legends, Feyre discovers that her captor is not an animal, but Tamlin—one of the lethal, immortal faeries who once ruled their world.

As she dwells on his estate, her feelings for Tamlin transform from icy hostility into a fiery passion that burns through every lie and warning she’s been told about the beautiful, dangerous world of the Fae. But an ancient, wicked shadow grows over the faerie lands, and Feyre must find a way to stop it… or doom Tamlin—and his world—forever.

Perfect for fans of Kristin Cashore and George R. R. Martin, this first book in a sexy and action-packed new series is impossible to put down!”
–Goodreads

A dark romantic fantasy inspired by the legendary tale of Beauty & the Beast. I adore the Beauty & the Beast love story…well okay I’ve only read the original once and that was a bit ago and even after I read it I still can’t shake away the Disney movie version that stole my heart as a child in the 90’s (also can I please just scream in agonizing excitement and anticipation for the 2017 live-action movie of Beauty & the Beast starring almost every awesome actor EVER?? SUCH a brilliant cast I am so beyond excited I might actually squeal.)

Back to the book, kid.

I found out about this book via a stroll through Goodreads.com, thought it interesting, added it to my TBR list and then that was that. But then one magical day I was at the bookstore to get a Christmas present for a friend when I saw one lonely copy of A Court of Thorns and Roses on the shelf and it was autographed. So obviously I bought it. I curled up on my bed in a blanket with my dog snoozing at my feet and I cracked open a book I knew would either be beyond terrible (as some reviews shrieked) or incredibly amazing (as other reviewers brayed). For me it was…

Incredibly fantastical. This story is 100% high fantasy. Filled with faeries and humans and magic everywhere. A whole other world that was interesting to explore but really not the point of the book (which I was okay with because honestly I was reading it for the love story). The multitude of Courts/lands was a bit confusing and occasionally I’d have to flip to the front where the map was located to get it figured out although most of the time I didn’t bother and just rolled with it. Like I said, the world-building was good but not prominent and if you can just roll with that then there’s no problem. It was pretty cool though, learning about the different tiers of fae, Maas definitely has a mind exploding with ideas. I also enjoyed seeing how the fae and human worlds interacted…well they didn’t really interact but that says a lot unto itself. Overall very, very fantastical and fun to dive into.

Terrifyingly dark. I knew that this book would be a perhaps darker telling of the classic tale but I didn’t realize just how dark it was willing to get. Do people die? Mhmm. But that’s to be expected really. Are people tortured? Oh yessss and it’s unpleasant and cringe-worthy and blehh. Dark hearts, dark deeds, dark lands, dark pasts, present, and futures. Darkness bleeds through this book so completely. Yes it has an average-dark beginning (which, okay, I admit didn’t have me immediately enthralled) and then things begin to brighten and you glide around a beautiful springtime land filled with warm sunshine as the love-story unfolds occasionally dotted with terror and monsters but you’re too swept up in the potential romance of it all to really be afraid. But then things go wrong and you can’t stop your momentum in time to keep from falling off the edge of a sharp cliff as the book takes a very dark and very steep turn for the nasty. I’ll just let you read it for yourself but when I say things get very dark I mean look up the word in a thesaurus and all synonyms apply. I appreciate the lengths to which the author was willing to go though. She didn’t shy away from the harsh possibilities, the cruel realities, and she wasn’t afraid of deviating from the simple classic fairytale.

Blushingly romantic. You wanted romance? Well you’ve got it. There are a few scenes where the room definitely heated up and got rather steamy and if this were a movie then you would be looking over your shoulder every two seconds checking to make sure your parents did not walk in. Most books I’ve read seem to gloss over deep romantic scenes giving you enough to hint as to what’s about to go down and then skipping to when it’s over. Not this book, no sir. Not overly explicit or anything but you definitely know what’s going down. Not a shy book at all.

I really liked her characters, I must say. She managed to create a heroine who could be both delicate and strong. Sure she’s not my #1 favorite heroine if I’m honest but yeah, I like her. Quite impressive. The handsome hero is also an impressive balance of fierce warrior and tender-hearted lover. He can tear worlds apart with his magic and strength but he would grovel to save his true love. He is not weak. But he is not wholly stone. They save each other and it’s truly impressive to watch how they do this again and again even if they do not always realize the many ways they do it. “Impressive” is indeed the word to describe their story.

Lucien is a stellar secondary character and both much needed and beloved. He is utterly himself as he diffuses tensions, adds comedy, adds sharpness, adds friendship, and adds reality. I’d definitely sign up to be friends with him.

Rhysand. Rhys, oh Rhys. The moment he stepped onto the page I was intrigued. And I also began to question the fairy tale ending that I was originally hoping for. As it is I think I’m rooting for Feyre and Tamlin…and yet I also sort of ship Feyre and Rhys if only because Rhys drew me in way more than Tamlin ever did. But if Feyre can’t have him, can I? Haha 😉 But really, he had me endlessly watching him, endlessly intrigued. He’s one of those characters who captures your eye and despite what he says, I just can’t shake a feeling that there is a whole lot more to him than what Feyre got to see. And I want to see it.

Amarantha? Disgusting (in a well-written/supposed to be kind of way). She is cruel and unrelenting but she is clever and that is irritating because you have to admire it even if that admiration is just a teeny microscopic drop in the boiling cauldron of hatred you otherwise have for her.

Oddly enough I feel that I could just read this one book and be satisfied. No need to read the rest of the series: half because everything is wrapped up happily ever after and I don’t want anyone ruining it and half because well yeah it was wrapped up quite nicely. Okay so Maas left a few dangling tantalizing loose threads to lead up into the sequel but I can ignore them quite contentedly. Except for one: Rhysand’s reaction at the very end of the book. I must know what he saw/thought! I have a suspicion but I want to know. But other than that I am torn between wanting to continue the story and wanting to pretend that the “happily ever after” lasts forever.

I don’t generally give an age-rating for most books because they’re usually pretty obvious but this book is often shelved as YA fiction and with that I know this covers a wide expanse of age ranges. The characters are 19+ and so maybe I’ll go with ages 16+ for this book. I say this just because some of the violence might be a bit much for the younger readers depending on what they already read/watch and the strength of their imagination (if you have a vivid one then prepare yourself). I also say 16+ because of certain romantic/sexual elements that I dunno, maybe aren’t really for the youngsters? Who knows though, maybe 10 year olds are into that sort of stuff now but I’m an old fuddy-duddy and it seems weird to think of younglings reading it. Hmm but maybe that’s just old-lady hindsight and if I was 13 I’d feel differently…whatever it’s up to you. Just know that there is torture and sex. Okie doke.

The plot was an interesting take. Maas stayed true to her inspiration but without hesitation of making it her own. Some people loved this book and some people hated it. If you’re expecting anything at all similar to the Disney version of Beauty & the Beast then prepare yourself because this is the definition of different and Maas does not try to pretend otherwise. While most people will identify Beauty & the Beast as the main inspiration this story also contains several other mythological elements such as East of the Sun and West of the Moon, and The Ballad of Tam Lin. Personally I really liked this book. I was afraid to read it in case the haters were right but poo-poo on them. I will take my vote and stand alongside the supporters because Beauty & the Beast comparisons aside I found this book riveting, captivating, and utterly thrilling on its own. Don’t let yourself get caught up making comparisons to the Grimm brother’s or Disney or any other telling because Maas has created something wholly hers.

A book that I was afraid I’d hate but hoped I’d love, A Court of Thorns and Roses is a dark and twisted fantasy spinning the classic tale of Beauty & the Beast into something terrifying, sensual, and eerily captivating. Faeries and humans, blood and love, all ensnare your senses driving you further into a world that would like nothing more than to destroy you.

Purchase here: A Court of Thorns and Roses

Check out the rest of the series! A Court of Mist and Fury (ACOTAR #2) and A Court of Wings and Ruin (ACOTAR #3) 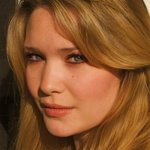 Sarah lives in Bucks County, PA, and over the years, she has developed an unhealthy appreciation for Disney movies and bad pop music. She adores fairy tales and ballet, drinks too much tea, and watches an ungodly amount of TV. When she’s not busy writing, she can be found exploring the historic and beautiful Pennsylvania countryside with her husband and canine companion.
-Goodreads

7 thoughts on “A Court of Thorns and Roses”