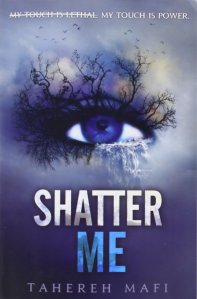 I have a curse
I have a gift

I am a monster
I’m more than human

I am their weapon
I will fight back

The last time she did, it was an accident, but The Reestablishment locked her up for murder. No one knows why Juliette’s touch is fatal. As long as she doesn’t hurt anyone else, no one really cares. The world is too busy crumbling to pieces to pay attention to a 17-year-old girl. Diseases are destroying the population, food is hard to find, birds don’t fly anymore, and the clouds are the wrong color.

The Reestablishment said their way was the only way to fix things, so they threw Juliette in a cell. Now so many people are dead that the survivors are whispering war – and The Reestablishment has changed its mind. Maybe Juliette is more than a tortured soul stuffed into a poisonous body. Maybe she’s exactly what they need right now.

Juliette has to make a choice: Be a weapon. Or be a warrior.”
–Goodreads

Hang on, give me a second. I have to fetch my socks because THIS BOOK BLEW THEM OFF.

This book blew me away. I have to read it again to make sure its awesomeness isn’t mostly just because it was a new book/first-time read but yeah, yeah it was pretty freaking awesome. Huzzah and high-five, Tahereh Mafi.

Sorry, no time to type more words. I have to go read the rest of the trilogy.

UPDATE: Yep. This book is insane in the most awesome way. In fact, the whole series carries you on a strong current of romance and action even past the very end where it continues to churn in your imagination and memory. A HIGHLY recommended read 😀
Are there some problems and some touches of excess drama? *mutters reluctantly* Maybe. But for whatever reason this series contains a magic that sucks in my soul and I will be re-reading these books many times over.

Also the cover art for this trilogy is BEAUTIFUL.

Juliette is such a broken forgotten character who somehow still manages to feel hope. She has the power to torture, the power to kill, and yet all she wants is love. While such a tortured past would cause many to be twisted into the monster the world believes them to be, Juliette has a heart that is too good and too strong. She is wounded and so very very sad and yet she is also fierce and stubborn. Adam swoops in desperate to bind her wounds but Warner stalks in determined to make her powers greater than anything ever known.

Adam is a dutiful soldier. Until he meets Juliette. They knew each other as kids and somehow, impossibly, their paths have crossed once more. He has been trained to kill for the ruling enemy but with his childhood love’s life at stake his life turns upside down and he’s willing to aim his gun at any who stand in their way as they determine to flee for freedom.

Juliette has spent her life dreaming of a simple peaceful life but Warner, the Chief Commander and Regent of Sector 45, sees nothing but raw potential in her. He steals her away from the asylum only to confine her to his headquarters where he plans their every move to unlocking that deadly power Juliette tries so hard to hide.

The characters had me at once but the first thing that made me fall in love with this book was the writing style. Mafi doesn’t always adhere to the typical but instead ventures into the artistic. Crossing out words, shaping sentences, dripping from thought to spinning thought, it all creates a poetic imagery that perfectly expresses Juliette’s mind and emotions of all that goes on around her.

I simply fell for this book and am absolutely heading to the library ASAP to grab the rest of the trilogy!

Shatter Me tells the story of a bird broken and caged, a bird who just might be a monster, a monster who could end the world…or save it.

Recommendation for similar books: The Hunger Games by Suzanne Collins, The Grisha by Leigh Bardugo, Red Queen by Victoria Aveyard, Trial by Fire by Josephine Angelini

She was born in a small city somewhere in Connecticut and currently resides in Santa Monica, California, where she drinks too much caffeine and finds the weather to be just a little too perfect for her taste.
When unable to find a book, she can be found reading candy wrappers, coupons, and old receipts.
-Goodreads

5 thoughts on “Shatter Me”