Remember, Remember the Fifth of November!

As a fan of the movie I decided to put together a post about the original graphic novel, the movie adaptation, my thoughts, and a bit on the history of Guy Fawkes Day/Bonfire Night. Keep reading for more! 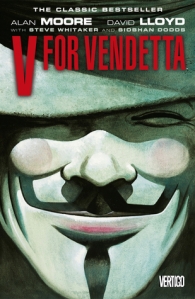 “Remember, remember the fifth of November…”

A frightening and powerful tale of the loss of freedom and identity in a chillingly believable totalitarian world, V for Vendetta stands as one of the highest achievements of the comics medium and a defining work for creators Alan Moore and David Lloyd.

Set in an imagined future England that has given itself over to fascism, this groundbreaking story captures both the suffocating nature of life in an authoritarian police state and the redemptive power of the human spirit which rebels against it. Crafted with sterling clarity and intelligence, V for Vendetta brings an unequaled depth of characterization and verisimilitude to its unflinching account of oppression and resistance.
–Goodreads

In a future British tyranny, a shadowy freedom fighter, known only by the alias of “V”, plots to overthrow it with the help of a young woman. –IMDB

I saw the movie before I read the graphic novel and I have to say it’s my favorite of the two, but mostly because graphic novels aren’t my favorite medium. The story is just so good and the movie will keep you on the edge of your seat both mesmerized and chilled. I’ve never celebrated Guy Fawkes Day as it’s not really a thing in the U.S. but I’ve heard about it for years since my Dad and his family hail from England. My brother and I like to celebrate just by watching this movie while eating an array of tasty snacks although it’d be awesome to experience the full fun in England some day.

The historical references and inspiration behind V for Vendetta are brilliant but what really makes this whole plot relatable, thrilling, and frightening, is how easy it is to imagine today because in some parts of the world it is already a reality. It brings forth the threats of a big government particularly when the public falls complacent. This is key, and I found it’s what makes this story stand out from the hundreds of other dystopian tales out there because it places the emphasis of the blame on the public. It’s both genius and uncomfortably accurate.

I will say that there are some definite differences between the graphic novel and the movie. The endings are different, the characters are somewhat different, the core inspirations are even different. But in the end they both proclaim a similar message. I do however think that the movie is much more rousing and exciting. It will have you ready to rage and fight and lift your fists for change. It’s simply fantastic with a bit of Hollywood grit thrown in. The graphic novel however gives you much better explorations into the characters (as most books tend to do) and gives a more prolonged look at the future by the somewhat insane novel-V focusing on keeping his ideas and legacy and hope alive through a captured teenage Evey rather than the movie-V which succeeds in quite the epic and dramatic Hollywood finale with the aid of an adult Evey.

In both regards however we witness V combatting a fascist Britain as a revolutionary…or terrorist, depending on the point of view. And it is riveting. The original graphic novel is good, but I definitely recommend the movie. If you’re interested in checking out both then don’t worry about which you choose first because despite having the same general plot and characters they’re actually rather different.

Don’t you Remember,
The Fifth of November,
‘Twas Gunpowder Treason Day,
I let off my gun,
And made ’em all run.
And Stole all their Bonfire away. (1742)

Guy Fawkes Day/Bonfire Night is an annual celebration observed on November 5th, mostly in Great Britain. It originates from the Gunpowder Plot of 1605, which was a failed attempt by English Catholics to assassinate King James I of England who was Protestant. Guy Fawkes was arrested at midnight on November 4th when caught guarding a cache of explosives (36 barrels of gunpowder) hidden beneath the House of Lords. The public celebrated their King’s survival with bonfires and has grown to include fireworks, dancing, food, and the burning of Guy Fawkes effigies (sometimes along with effigies of other politicians).

Under the rule of Queen Elizabeth I, Catholicism was heavily repressed in England. Many priests were killed and it became illegal to celebrate Mass or be married in accordance to the Catholic faith. When King James I took the throne there was hope that this oppression would change as his mother was Mary Queen of Scots and a devoted Catholic (as well as Elizabeth’s competitor for the English throne). However James did not end up supporting Catholicism going so far as to condemn it as a superstition, ordering all Catholic priests to leave England and refusing to lighten any oppression of the Catholic faith and rites. He even introduced fines for those refusing to participate in the Protestant faith and banned Catholics from voting, or pursuing careers in either law or the military. Catholics were not technically fully emancipated in England until the 19th Century, which I found a bit surprising.

Guy Fawkes Day/Bonfire Night may have originally celebrated a victory over traitors to their King but over the centuries it has grown to become a more general celebration of the might of country filled with either patriotism or just the enjoyment of a big party.

The movie, and the graphic novel on which it is based, follows V who did not comply with the laws of England and was tortured for it, and in this dark plot he succeeds in toppling the oppressive government. The loyal saw Guy Fawkes’ fall as a victory, but the oppressed saw it as a tragedy. The infamous V decides to set things right.

One thought on “V for Vendetta”