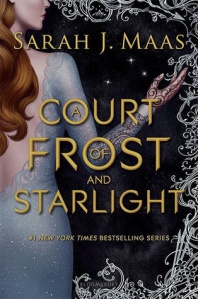 “Feyre, Rhys, and their close-knit circle of friends are still busy rebuilding the Night Court and the vastly-changed world beyond. But Winter Solstice is finally near, and with it, a hard-earned reprieve. Yet even the festive atmosphere can’t keep the shadows of the past from looming. As Feyre navigates her first Winter Solstice as High Lady, she finds that those dearest to her have more wounds than she anticipated–scars that will have far-reaching impact on the future of their Court.”
–Goodreads

Book One: A COURT OF THORNS AND ROSES

The first three books of the A Court of Thorns and Roses series is really Feyre’s trilogy. They’re told from her POV and focus on her story. Maas has informed us that she will be writing more books that take place in this world but that will focus on other major characters (you actually get a sneak peak at the end of this book!) and so this novella helps bridge the time between ACOWAR and the next novel to come.

Overall this novella was a bit like a TV Christmas Special that gives us a glimpse into the characters and Prythian (mostly Velaris) after the war against Hybern. The chapters alternate between a few POVs (Feyre, Rhys, Cassian, Mor, Nesta…) so it gives us updates into the mindsets of most of the major characters. I wouldn’t say this novella is crucial to read but it was a welcome return of these beloved characters. 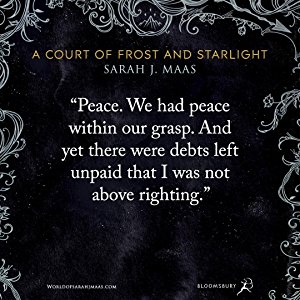 As I mentioned this novella largely centers on the Winter Solstice celebration which is basically like our human Christmas. There’s gift giving, delicious baking, fresh snow, festive garlands, crackling fireplaces, and most importantly time with family. As the story approaches the holiday it also shows us how Velaris has been healing after Hybern’s attack, what the Court of Nightmares has been up to, how the Illyrians have been adjusting, etc. There are parts that are mournful, moments that are joyful, and several breaths in-between. It’s enough to give you a status update plus a viewing of a major fae holiday, but it’s not really a book with its own demanding plot.

To be honest I don’t think this was Maas’ strongest writing. There was definitely a bit o’ cheese in some of those lines but it certainly maintained that Maas minxish charm we all know and love so I think those who are fans of sweeter romances will enjoy this more than those who prefer books with an edge.

And it’s not a spoiler to say that the next book in this ACOTAR world/series will be centered on Nesta. I never liked her. At all. I do not understand the fan following for her so personally I’m not overly excited about her book although I will admit that after reading that first sneak peek chapter and getting a glimpse of where her story will go I am curious. So on one hand I’m perfectly fine just sticking with Feyre’s trilogy but on the other hand I sorta want to see Nesta calm the hell down and I remain curious about who the other books will center around (Honestly I just want a happily ever after for Az. That’s it. No other book could truly entice me).

But back to this novella…

A sweet yet brief continuation of the ACOTAR series with an undercurrent of heartache, this novella bridges the war of Hybern to the slow-healing future that waits, anchored by the Solstice celebration while sharing moments between the beloved characters spun throughout the series. A delightful gift for fans of Prythian.

Purchase here: A Court of Frost and Starlight

Check out the rest of the series: A Court of Thorns and Roses (book 1), A Court of Mist and Fury (book 2), A Court of Wings and Ruin (book 3)