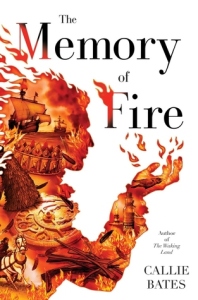 “Jahan Korakides is the hero who saved the life of the crown prince in battle, helped win the revolution in Eren and earned the heart of Elanna, the legendary Wildegarde reborn.

But Jahan Korakides is also broken; haunted by memories of the woman who experimented on him and his brothers as children. So when the empire threatens war in retribution for Elanna’s illegal sorcery, Jahan leaves Eren to negotiate with the emperor on Queen Sophy’s behalf. But the world he left has changed – riots rock the city of Ida, his brother is missing and the crown prince refuses to speak to him.

Jahan’s only hope of success seems to lie with the rebels in Ida. Yet, if he joins them, he will merely spur on the war he’s desperate to avoid, and risk revealing himself as a sorcerer.

And then the witch hunters arrive at court, bringing Elanna in chains.”
–Goodreads

Book One: THE WAKING LAND

Thank you to the publisher, Del Rey Books, for sending me a copy to review!

To be honest I wasn’t sure if The Waking Land was a standalone or not at the time that I read an eARC. It had an ending yet there was always the capacity to write more if the author desired and I’m glad to find that she decided to write this sequel. While it is technically a sequel it is also a bit like a companion novel in that Elanna’s main story is contained in The Waking Land while Jahan’s story takes center stage in this book.

I’m a sucker for fantasy and I’m happy to say that this book didn’t disappoint me. I really loved getting to dive into Jahan’s past as it rises up to threaten his future. We get to read much more about the violent brand of magic burned into him, the witch hunters who stalk with hunger in their eyes and ringing those cursed bells, and the political enemies across the sea threatening to destroy the peace and union Elanna and her friends had finally managed between Caeris and Eren. She managed to wake the land and summon magic stronger than any had seen before but although that war was won, Paladis lurks in the wings ready to strike next.

Jahan is forced to leave the relative safety of his new home, a land that is eager to flood his veins with more magic than he’s ever been able to summon before, to rescue his brothers, sway the bloodthirsty Emperor, and face down the enchantress that tortured him as a boy. Elanna’s world is one free of hiding but for Jahan he must smother all trace of his humble magic to infiltrate the courts or risk death. Pretty exciting, no?

Jahan thinks he’s not needed as he roams with no power, little magic, and truthfully nothing of much use to do, but when Elanna exhausts herself and his home thirsts for war he just might be the one person who can save them after all.

I liked the balance of politics and whimsy threaded throughout the plot. Lovely fantasy prose spins for us a tale of darkness battling light filled with magic, adventure, deadly schemes, and loyalties threatening to waver.

As this book really puts focus on Jahan’s story it wasn’t overwhelmingly necessary to have read The Waking Land however I’d definitely still recommend you read these in order to better understand and familiarize yourself with some of the characters. I found it exciting to explore further the geography of this fantasy setting and finally meet characters only mentioned by name.

I really enjoy reading Bates’ writing, something about it lulls me and pulls me right into the story. That combined with just how wonderfully fantasy this book was made this a fabulous weekend read! If you too are a fantasy fiend on the hunt for your next adventure then I certainly recommend you consider this series!

Prose spun like soft tendrils of fire chants the tale of a peace about to fall while the bloodthirst of magic, power, and legacy sing to a soul who can just perhaps save them all. Dancing on the edge of darkness Jahan’s story grasps onto the light of hope as he fights for family and freedom. Exciting and fantasy in its heart, this book is a must for fantasy fans everywhere.

Purchase here: The Memory of Fire

Check out the rest of the series: The Waking Land (book 1)