The Assassin Game by Kirsty McKay (2016)

“Who will be left after lights out?

At Cate’s isolated boarding school, Killer is more than a game—it’s an elite secret society. Members must avoid being “Killed” during a series of thrilling pranks, and only the Game Master knows who the “Killer” is. When Cate’s finally invited to join the Assassins’ Guild, she know it’s her ticket to finally feeling like she belongs.

But when the game becomes all too real, the school threatens to shut it down. Cate will do anything to keep playing and save the Guild. But can she find the real assassin before she’s the next target?”
–Goodreads

Why pairing up British boarding schools with murder is such a classic pairing, I don’t really know, but McKay manages to take the cliché and give it her own twist.

Have you ever played the game Assassin? Or even Mafia? Well this book revolves around a game that’s similar but played out on a much grander scale (and that’s before the real blood spills). Boarding schools and secret societies/clubs/games are another traditional pairing and with Umfraville Hall we get The Assassins’ Guild. The Grand Master, who this year is a cocky senior named Alex, sets up the game and watches as a randomly (and secretly) selected “killer” knocks off their fellow Guild members one at a time. It’s all good fun for the mystery-loving adrenaline junkies, and even those not invited into the Guild get a laugh when they witness a creative “killing” go down publicly.

It’s basically a school tradition, and now it’s Alex’s turn to leave his mark on the game. This year will be the greatest yet, if the killer doesn’t ruin it first.

Cate is the main character of the story and we follow her as she’s initiated into the Guild and begins the game. There’s a bit of expected school drama and teen drama to fill in the cracks for a while but eventually the paranoia sets in as threatening calling cards are being left for her and she’s not sure they’re part of the game.

Obviously I can’t say much about the story without inadvertently spoiling something but there are plenty of characters with motive, means, and opportunity. And not just for the “Killer” but for the real murderous psycho lurking amongst them.

I didn’t necessarily guess who the killers (the game one and the real one) were right off the bat, although I had my suspicions, but I wasn’t particularly surprised when they were revealed. Some of the characters and false leads that were tossed in to throw the reader off felt a bit too blatant, although some were confusing enough to trip me up for sure. Oh, and there was this little “twist” at the very end to try and knock you off balance and freak you out but I didn’t buy it. Even so it was plenty of fun reading along as chaos unfolds. Having played the much more friendly versions of Assassin and Mafia, I could easily picture just how amped up my adrenaline would be if participating in a game of this scale.

Overall though I can definitely see this being a ton of terrifying fun to play (minus the bonafide serial killer) and this book managed to hold my interest captivated from start to finish. Thrillers are always a coin toss, but I found this one a pretty fun ride.

The Assassin Game is a tradition of generations, a laugh for the wild and a grave for the marked. Spinning its chaos with the seeds of innocent fun, it quickly escalates into a murder spree that will freeze your blood and catch your breath. An exciting read for those on the hunt for books with a bit more thrill. 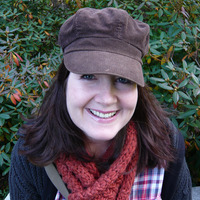 I trained as an actor at Guildhall School of Music and Drama and trod the boards for a few years, then became a producer, running my own touring theatre company. It was during this time that I started writing plays for children and pantomimes, some of which are still being performed today. In fact, if you watched a panto at a school in England any time over the last twelve years, there’s a pretty good chance that I wrote it. (That’s if it was any good. If not, then it was definitely not one of mine.)

In 2008 the Society of Children’s Book Writers and Illustrators named me a winner of their search for new writers, and published my work in their inaugural anthology, Undiscovered Voices.
-McKay’s Website

2 thoughts on “The Assassin Game”

Leave a Reply to Books and Lemon Squash Cancel reply