Today is the day!!! It’s FINALLY here!!! The second book in the Otherworld Trilogy released today and I am thrilled to be able to tell you about it! Carrion Crow is the second book in this new YA paranormal/fantasy series although despite it being a sequel it isn’t a middle book but rather a conclusion before the final book whips us back in time explaining how the chaos Adrianna and Geoffrey are dropped into in book one all began. In other words, book three is going to be a villain origin story. So if you’re on the hunt for an exciting fantasy series that won’t be a thousand books long then this is a definite you should check out. Keep reading my post for more on this book, the first book, an excerpt, teasers, and more! 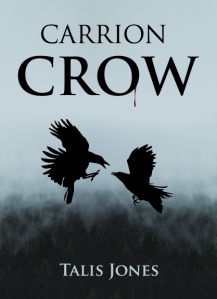 Eisen and the Crown consume themselves in a bloody battle of thrones succumbing to the siren call of a long foretold fate. With each move one makes the other must counter, tilting the ever-watchful balance of Oneiroi. The question remains: which shall rise victorious and which is the harbinger of darkness?

Risen from the ashes, the Whispers gather themselves to seize back Oneiroi and fulfill the prophecy they’ve guarded for ages past, determined to see it through. Set on destroying the Crown their powers stir the ancient forest that has shielded them until now. It is time to reclaim their realm.

Adrianna finds herself trapped within the Quidelish palace but nothing can keep her from fighting within. Using every ally and skill in her pocket she races to rescue her brother from a war he must not win. Forced into a position of emissary for all three warring parties she struggles to control the impending bloodshed.

The Island demands blood for blood,
but whose shall it be?

“Crooked Raven was but the beginning. Carrion Crow scales new heights beneath the staggering storm of prophecy that could cleave apart the Island’s future either resurrecting it or damning it forever. The line between hero and villain blurs in a dizzying dance as the Verdandi siblings face down a Crown not yet through haunting the dead. Winner takes all, but when the blood is washed away will there be anyone left standing to claim it?

An epic finale that will have you more curious than ever to read book three, a bridge tying together the ending with the once upon a time…”
-pooled ink 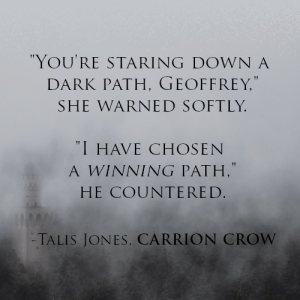 Cries rang out, jeering taunts filled the breeze, and bloodthirsty barks caught Eisen’s attention. His head snapped up from the notes he’d been reviewing. Stepping out of his tent settled in the heart of camp he quickly located the disturbance. A fight. With quickened steps he strode towards the source finding a crowd of his soldiers forming a ring around Aleksander and a stranger. He watched as they matched each other blow for blow. His man increased his attacks leaving behind all etiquette as the stranger refused to be taken down but even so the stranger himself seemed able to shrug off his formal training and play just as dirty. Eisen studied them curiously.

A loud crack rang through the air and Aleksander cradled his arm moaning in pain. The glass had shattered and the crowd moved to rush in and take their revenge. “Stop!” commanded Eisen. His voice was calm but it carried. The soldiers froze their attacks and parted as Eisen stalked towards the stranger standing bloodied in the center. The men and women grumbled and spat but made no move to hurt the man. He seemed completely unfazed by their hisses and leers, standing with a straight back. Despite his bleeding nose, split lip, and pummeled body, he looked at Eisen straight in the eye as he approached him. “Who are you?”

The man tilted his head. “Do you not remember me? We met but once, it’s true.”

“I can hardly recognize you for a man under all that filth,” Eisen pointed out dully.

“Ah yes, that is also true.” The man offered a horrible smile for blood coated his teeth. “I am well acquainted with your sister and I’ve come to join you.”

Eisen blinked. “Your name,” he demanded.

“Jack Cromwell,” the man answered with a slight bow of the head. At the sound of his name several in the gathered crowd hissed and stories surfaced in Eisen’s memory. “Ah, I see some of my fans are here. Good to know,” the man smirked.

Flashes of the man Adrianna had danced with in Mordréda all those months ago spun in Eisen’s mind. A man with dark hair, copper eyes, and footsteps laced with lethal grace. Not a white knight by far, but that night he hadn’t seemed like a dark one either. The man was so filthy from the muddy brawl he could not be sure, but if this was Adrianna’s Jack then she must be in trouble. “Show me your arm.”

“Quit wastin’ time,” sneered a soldier with snake-like eyes and stringy hair. “Let’s kill ‘im! He’s got debts to pay for!” A few of those stood around him began to voice their agreement but without so much as a glance Eisen flung out his arm and the man crumpled. The others fell silent, their protests forgotten.

“I know Israfil bonded my sister with a man named Jack Cromwell and if you are he then you will show me your arm.” Eisen held the man’s eyes with an unwavering stare filled with challenge and promised threats should he be lying.

Without breaking eye contact the muddy fighter rolled up his sleeve revealing a swirling jagged tattoo inked along his forearm. Rubbing his palm, a melting sun peeked through the dirt. “I am Jack Cromwell, bonded with Adrianna Dietrich Verdandi, sister to you, Geoffrey Martinez Verdandi. So don’t you dare turn me away, brother.”

Start from the Beginning…

“Sometimes you must let go of who you were to
embrace what you could become.”

“And if that damns me to Hell?” she asked.

He smiled. “Then we shall meet again.” 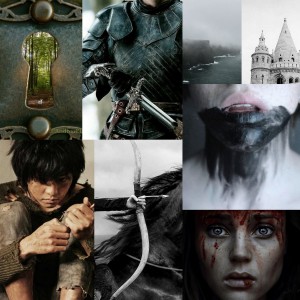