I’ve read all of Peckham and Valenti’s books so I was thrilled when I found out that they would be teaming up to write a new series that blended their respective genres and even more excited when they sent me eARCs to review! Normally I’d write an individual post for each book as it’s released but since this will be a binge-release and I’d been given the opportunity to read them all at once I figured I’d save us all the time and give you my non-spoiler thoughts on the series as a whole! If you enjoy the dark allure of vampires, the thrill of unexpected romance, as well as the rush of dystopian rebels, then you really ought to check this one out. Keep reading for my review and more on each book plus the authors!

Thank you to the authors for submitting these books for review!

“This series is utterly addicting. Peckham and Valenti combine their genre specialties to craft a riveting Dystopian Vampire Romance saga that will take your breath away. From the first chapter you’ll be racing in thrilling desperation to read what happens next and I strongly suggest you plan the time to read these books back-to-back because those cliff-hangers are insane, the fight scenes are exhilarating, and the slow-burn romance will have you swooning! Alternating POVs, flashbacks, ancient vows, unexpected love, and it all collides in this seductive, adrenaline-dripping tale.”
-pooled ink 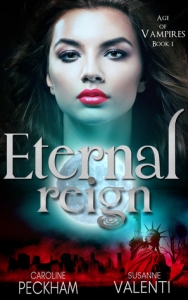 In the year 2133, vampires rule America.
Within the Realms, human life is defined by blood.
But there is a way out: The Testing.
No one knows what happens to those who pass. But rumours of the powerful vampire family who want them spark fear in the chosen few.

When sisters Callie and Montana pass the test, they rebel against their fate and plan to do what no human has ever done.
Escape their Realm.

But the vampires have eyes everywhere and the girls are soon torn apart, sending them spiralling down two dangerous paths.
One to the vampires.
The other to the slayers.

With Callie in the hands of a fierce warrior and Montana trapped in a terrifying ritual run by the royal vampires, can they find their way back to each other before it’s too late?
Or will their fates be decided by the deadly men who shadow them..?

While Callie closes in on the blood bank in the hopes of rescuing her family, Montana accepts the dangerous task of spying on one of the vampire royals.

On the east coast more deaths arise in New York City and Montana soon realises she’s at the heart of an assasination plot. But if she doesn’t work out who her enemies are fast, she could be their next target.

On the west coast, Callie struggles with her newfound feelings for Magnar. And as she grows stronger, more capable and ready to bring down the blood bank, she realises her time with him could soon be up.

In the second instalment of the Age of Vampires Saga, two sisters must risk it all to protect each other and try not to fall for their dangerous companions along the way… 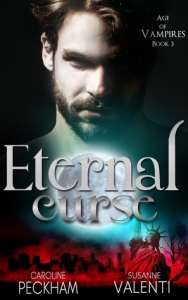 While Callie struggles with the binds of the slayer’s vow, Montana faces a wedding which will deliver her into the hands of the vampire royals forever.

As the murders escalate in New York City, it seems Montana is their next target. And as Callie races there to rescue her, she finds herself in the hands of the gods…

Can Callie make it to New York before all hope is lost? And will Montana be able to tear herself away from her fiancee before the wedding, even though she’s captivated by him? 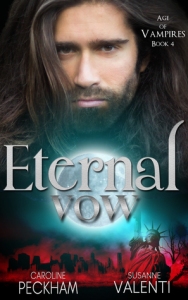 In the wake of the disastrous wedding, Montana and Callie are pulled in opposing directions by the binds that tie them.

While Montana yearns for Erik Belvedere, Callie is trapped between who her heart wants and the bloodsucker the gods have bound her to.

Tension builds as the gods toy with the slayers and the vampires, compelling the to collide. And with an age-old hatred burning between Magnar and Erik…it’s time for the fight to take place.

When Montana wakes to an impossible reality she isn’t remotely prepared for, Erik seeks to make the transition as easy as possible for her.

Callie struggles with the terrifying decision she made for her sister and fears what will happen as she and the slayers make their way onto Erik’s estate to meet with her.

But while the fragile alliance between the slayers and the vampire royals is barely holding together, they are forced to unite against a common enemy. Valentina is taking to the streets, causing havoc in the city. And it seems the gods are helping her to do the unthinkable and rise to power over the New Empire… 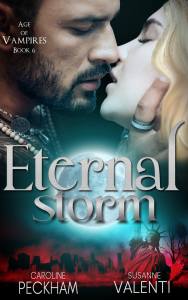 A dark storm draws closer as Erik and Magnar are lost to the hands of the new queen.

Callie and Montana race south in a desperate bid to reach the holy mountain to break the curse, but with Valentina hot on their heels, it’s only a matter of time before she catches up.

Can the twins find a way to overcome the trials that are thrown their way? Or will the gods prevail once and for all…

As Callie and Montana take their fated path toward finishing the curse, they must rely on the courage of their friends to help them reach it before their enemies catch up.

It’s time to pay the debt. But are they ready to face the price?

Caroline Peckham is the author of The Rise of Isaac Series and the V Games Trilogy.

Caroline lives in the south east of London with her best friend and a little rescue cat. When she’s not writing, she’s binging Netflix shows, going to the gym or at the pub pretending to be cool.

Susanne Valenti: I’m a dystopian / sci fi author (that’s the dream anyway) but my day job is a little less creative and a has a bit more catitude. That’s right, I made a terrible cat pun. I work with my family running a boarding cattery (that’s a hotel for cats) and we also help some lovely rescue kitties while they look for their new homes.