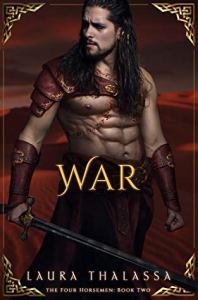 The day Jerusalem falls, Miriam Elmahdy knows her life is over. Houses are burning, the streets run red with blood, and a traitorous army is massacring every last resident. There is no surviving this, especially not once Miriam catches the eye of War himself. But when the massive and terrifying horseman corners Miriam, he calls her his wife, and instead of killing her, he takes her back to his camp.

Now Miriam faces a terrifying future, one where she watches her world burn town by town, and the one man responsible for it all is her seemingly indestructible “husband”. But there’s another side to him, one that’s gentle and loving and dead set on winning her over, and she might not be strong enough to resist.

However, if there’s one thing Miriam has learned, it’s that love and war cannot coexist. And so she must make the ultimate choice: surrender to War and watch humankind fall, or sacrifice everything and stop him.”
–Goodreads

This book. THIS BOOK. After receiving an eARC of book one, Pestilence, I was totally surprised by how much I enjoyed it and was left pining after book two. Well at last the day has arrived and I’m here to let you know that it was worth the wait.

Massive thank you to Laura for selecting me to receive an ARC of War!! I know it was a tough competition and I feel so thrilled that I was one of the lucky few! She’s absolutely one of my favorite paranormal romance authors and waiting for each new release has been torture haha

War takes place a few years after Pestilence and while that first horseman plagued North America with holy duty and total ignorance of humanity, this brother of his has been tearing up the east and he is well familiar with humanity’s darkness. Of course it’s during a raid to destroy Jerusalem that he runs into Miriam and his entire path is altered. Well, he thinks he just got a wife as some sort of reward from God for doing a good job, but slowly the changes come and just like his brother he must discover the softer goodness that humanity has to offer and decide if it’s worth abandoning his righteous battle to save it.

War is brutal and simple. He is war. Slaughtering man, woman, and child isn’t personal, it’s his holy duty, his purpose, and his being. So as you can imagine the romance is a slow-burn and thank goodness for that. Anything faster paced would’ve been cheap, unbelievable, and disastrous. But Thalassa has really honed her writing chops and what begins as an impossible relationship somehow transforms into a pure testimony of love and sacrifice. Well done in my opinion.

But yeah, War is war so he doesn’t change fast at all. In fact it takes him ages to finally realize that he needs to change. Time and time again he demands Miriam’s surrender but a marriage isn’t a conqueror and a conquered, it is a team of equals each surrendering their selves for the well being of the other. His character arc was so intriguing and subtle enough to surprise you by the end because you’ll hate his obstinate, unyielding, arrogant, merciless, heartless self when you begin but by the end you’ll be crying and begging to spare him and you’ll hardly know how you got there. (Makes me think a bit of Lahn from The Golden Dynasty by Kristen Ashley but better).

Miriam is an awesome protagonist in this too. War’s path of redemption comes full circle with Miriam’s path of bravery. She’s fierce and willing to fight till the end and she suits War so very very well. But I loved the balance of her character because although she’s been through so much and she’s willing and capable of cutting soldiers down, she’s also good-hearted enough to place herself between sword and innocent. She’s definitely flawed, not some perfect angel by any means, so she makes many a mistake as she tries to fumble her way through her sudden life with War’s army and his stubborn belief that she’s his wife, but this just added to the realness. As for her arc, she might be brave in battle but she eventually must learn to surrender and be brave with her heart. She can’t force War to change his path but if she’s brave enough and willing to surrender her hatred then she might be able to show him why he should.

ALSO I really really loved that Thalassa included Zara as a friend for Miriam!! Romances get sooooo wrapped up in the leading man and lady and I’m always like ummmm don’t they have any friends?? In this story it would’ve been realistic for her not to have any friends (they all fo sho dead and the people at the camp are wary of her) but I love that Thalassa made it work and added Zara. Yeah, lots of good characters in this one that led to surprising plots twists that were super well done. (Also, real quick, I love how Thalassa even gives the horsemen’s horses a personality haha I just love it!)

The world-building and plot in this book, just like in book one, exist (haha) and are unflinchingly brutal. I joke because too many romances forget about doing more than the barest amount of world-building or even plot UGH but Thalassa always does a really good job of keeping the story grounded. But yeah, oof, this is the apocalypse and especially since this horseman is War there is a ton of carnage in the story. People slaughtered mercilessly left and right, towns left D-E-A-D, soldiers bathed in blood, blehhh. I mean it’s gross but I also love it because it’s so gritty and realistic. *insert applause*

And the setting! I’m so SO happy that Thalassa has written this series to truly span the globe. TOO MANY TIMES movie makers and book writers set everything in one locale. Everything. That’s fine for small-scale stories obviously but you’d think when it’s about a world-wide disaster that they’d include, ya know, the world. Like for some reason all the Four Horsemen decide to appear in the U.S.? The aliens just happen to land in the U.S.?? The monsters just decided to attack the U.S? Like that’s not fair, what about the rest of the world?? *rest of the world is avoiding eye contact like um no thanks you can keep those nightmares never mind about equality or realism we’ll just stay alive quietly in the corner* haha. But while Pestilence rode on his white horse across North America, War rode his red beast through the Middle East/Northern Africa/idk how far east he started initially. I love this not only for the realism and diversity but because it helps make each book stand on its own by featuring unique cultures. We first met a Canadian firefighter who stands up to the Horseman of Pestilence, now we meet an Israeli craftswoman who faces down the Horseman of War, and next we will meet someone I am sure will be just as interesting to take on the Horseman of Famine, and oh I’m not even sure how to begin imagining who might match the Horseman of Death.

So yeah, book two… The romance is slow and surprising, the world is brutal and haunting, the plot is twisty and intriguing, the pace is both steady and quick as lightning, and the characters are fully formed for better or worse. War is a sequel one will not be quick to forget.

Asdjkafl!! Thalassa just does such a good job. I mean, this whole review is just me rambling because I don’t quite know what to say. I’m impressed, satisfied, and already bouncing in my chair for book three: Famine. If you at all enjoy paranormal romance or are interested in a fantastic series based on the Biblical Apocalypse then you need to check out Thalassa’s books. You just need to.

Check out the rest of the series! Pestilence (book 1)