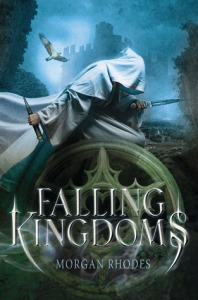 “In the three kingdoms of Mytica, magic has long been forgotten. And while hard-won peace has reigned for centuries, a deadly unrest now simmers below the surface.

As the rulers of each kingdom grapple for power, the lives of their subjects are brutally transformed… and four key players, royals and rebels alike, find their fates forever intertwined. Cleo, Jonas, Lucia, and Magnus are caught in a dizzying world of treacherous betrayals, shocking murders, secret alliances, and even unforeseen love.

The only outcome that’s certain is that kingdoms will fall. Who will emerge triumphant when all they know has collapsed?

It’s the eve of war…. Choose your side.

Princess: Raised in pampered luxury, Cleo must now embark on a rough and treacherous journey into enemy territory in search of magic long thought extinct.

Rebel: Jonas, enraged at injustice, lashes out against the forces of oppression that have kept his country cruelly impoverished. To his shock, he finds himself the leader of a people’s revolution centuries in the making.

Sorceress: Lucia, adopted at birth into the royal family, discovers the truth about her past—and the supernatural legacy she is destined to wield.

Heir: Bred for aggression and trained to conquer, firstborn son Magnus begins to realize that the heart can be more lethal than the sword….”
–Goodreads

I don’t know what’s wrong with me! Sometimes embarking on the path of a book reviewer has its downsides. Pros? Free books! Author chats! Blog tours! ARCs! Cons? …okay how come all of these lovely books are starting to blend together and sound like a bunch of recycled plots and trope checklists? Is this a harsh assessment? Perhaps, but it’s essentially the pit I seem to be slipping into. This is the exact type of book I really wish I would’ve read sooner because then I know I would’ve loved it and been less observant of the many tropes it filled. #professionalhazard

So many blogger friends love love love this series and it’s because of their enthusiasm that I moved it up my reading list. It promised (and technically contains) tons of my favorite fantasy elements! And yet…*sigh* it took me a whole month to get through it simply because I kept forgetting about it. I enjoyed it enough while reading but it was easy to set down and unfortunately every time I did I would forget I hadn’t actually finished it yet. But let’s talk more about the story.

After an intriguing twisting prologue we follow alternating POVs. The three main characters are Cleo, a princess with a dying older sister, Jonas, a son of a wine-maker and growing rebel, and Magnus, a prince set to inherit the throne and guarding a forbidden secret. I really love following multiple POVs with fantasy books, I feel it helps effortlessly expand the world-building and add a welcome complexity to the plot. The risk, however, is getting the reader to enjoy each POV.

Cleo. Cleo…well, she sucks. Her storyline made me realize just how much I HATE the blackmail trope. H A T E. Especially because it is almost never worth the trouble that succumbing to it will cause and it most certainly was NOT worth it in this book. Cleo isn’t some weak, demure female, so to watch her be such a teenage yellow-bellied fool was frustrating to me. I tried reserving full judgment until the blackmail was revealed but when it was I was done with her. I did appreciate her determination to do whatever it takes to save her sister and her attempts to avoid being a spoiled girl, but it just wasn’t enough for me. Basically I found myself stuck holding a grudge haha.

Jonas was an understandable character and a nice contrast to Cleo and Magnus who are both royalty. Sometimes he was clever and I loved it, other times he was an irritating hotheaded presence.

Magnus was…interesting. His secret is pretty obvious and revealed early on to the reader and I wasn’t sure how to feel about it haha. In general I actually liked his cold cunning character, but his dad is the worst and like any child he can’t help but want to impress him.

The way these characters’ lives slowly, cunningly intersect and overlap was fantastic and I can see why so many readers are drawn in and held captive. There is so much going for this book/series to be sure. I’d almost compare it to a tame version of Game of Thrones. There are twisting intertwining POVs, lots of political intrigue, a plethora of scandal and drama, plenty of players each with their own scheming agendas, and everyone wants the Kindred to gain ultimate power and rule over the realm.

The magic system and the world-building? Interesting! I really liked those elements and with some of my issues with the plot aside I thought the story was compelling. But I’m a character reader for the most part and unfortunately I just couldn’t connect with them in this book. I stuck with it because people kept saying how good it was and I know that sometimes you have to binge those first 50-100 pages to get sucked in. And yeah, unexpectedly I did fall into the story’s rhythm, but it never really captured me, ya know? It didn’t make me lose track of time and it wasn’t hard to put down but it was certainly interesting enough to make me return.

An entertaining read, just not an addicting one. For me at least. There’s so much love out there for these books that you should definitely look into it if you’re a fantasy lover.

Falling Kingdoms has all the makings worthy of a YA headliner. Political intrigue, clashing kingdoms, dying magic, royals and rebels, forbidden romance, and those are just the highlights of the first book in this twisty fantasy series. Is it full of tropes? Sure, but what book isn’t? It’s still a definite recommendation for any fantasy readers out there.

P.S. I’m keeping this one on my bookshelf to try again someday. I’m hoping maybe if I give it a second chance in the future that I’ll get hooked and devour the rest of the series.

Similar Recommended Reads: Shadow and Bone by Leigh Bardugo, Frostblood by Elly Blake, The Cruel Prince by Holly Black, Lichgates by S.M. Boyce, Sowing by Angie Grigaliunas, Throne of Glass by Sarah J. Maas, Song of Blood and Stone by L. Penelope, Sora’s Quest by T.L. Shreffler, An Ember in the Ashes by Sabaa Tahir 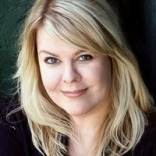 Morgan Rhodes lives in Ontario, Canada. As a child, she always wanted to be a princess — the kind that knows how to wield a sharp sword to help save both kingdoms and princes from fire-breathing dragons and dark wizards. Instead, she became a writer, which is just as good and much less dangerous. Along with writing, Morgan enjoys photography, travel, reality TV, and is an extremely picky, yet voracious reader of all kinds of books. Under another pen name, she’s a national bestselling author of many paranormal novels. Falling Kingdoms is her first high fantasy.