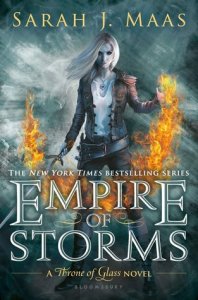 The long path to the throne has only just begun for Aelin Galathynius as war looms on the horizon. Loyalties have been broken and bought, friends have been lost and gained, and those who possess magic find themselves at odds with those who don’t.

With her heart sworn to the warrior-prince by her side, and her fealty pledged to the people she is determined to save, Aelin will delve into the depths of her power to protect those she loves. But as monsters emerge from the horrors of the past, and dark forces become poised to claim her world, the only chance for salvation will lie in a desperate quest that may mark the end of everything Aelin holds dear.”
–Goodreads

Book One: THRONE OF GLASS

…I am speechless and devastated and applauding and clawing for the next book in the series. 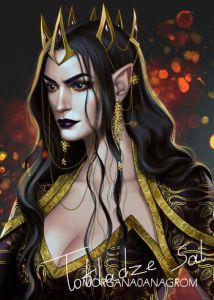 Maeve is the worst (pictured above) and has for too long been a lurking shadow in Aelin’s story. At last she steps forwards onto the battlefield and I wish she’d just shove herself under a rock somewhere and die. Aelin has had (and still has) many enemies but with each turn in the play another is struck down however Erawan, the Valg king, and Maeve, a Fae queen, are so clearly the biggest cruelties to face. The thing is, with Erawan it is easy to hate him because he is a demon incapable of anything but cunning and killing. Maeve, however, has the capacity to be much more (she looks like them, she feels like them, etc.) and yet has chosen to be a dark blight in history. Maeve is worse because while Erawan’s tactics are hideous, unnatural, and horrific, they are not really personal. Maeve’s every move is selfish and cruel and she manipulates circumstances and souls around her to her own end. Dare to love and she will turn it into a noose without a second thought.

Ugh, we’re clearly going to be enduring more of her horribleness but for now I don’t want to talk about her anymore. She’s terrible like she always was and that really sums her up. OH and I also hate Darrow of Terrasen. To Hell with him.

The POVs in this book are many and widespread but I loved following each one. At long last paths converge around Aelin and the results are spectacular. Fae, witch, mortal, half-blood, pirate, assassin, god, and memory…great forces unite and destroy as debts are called and motives align. This book truly feels like the climax in the series and I can barely breathe when my thoughts even flicker towards wondering what will come next. Perhaps it is a good thing that the next book in the series takes us elsewhere with Chaol and Nesaryn so that we might have a moment to gather ourselves for what will be the final stand.

But back to this book…

Aelin Galathynius is officially one of my favorite characters ever. I mean she already shoved her way into my Top 10, then my Top 5, and now… She’s effing brilliant and cunning and lethal and good. I can’t even imagine the masterwork that is her busy brain. She wields multiple truths and secrets, plans and backup plans and side plans and hidden plans, she fights tooth and nail with no guilt or apology and yet she also remains focused on the greater goal which is so much bigger than herself. She can kill in any form she pleases without a blink or thought but she can also offer compassion and protection so depthless it is no wonder even her enemies stand by her side. If anyone could “rattle the stars” it would be her.

As expected (and to my great satisfaction) characters continue to develop and evolve and intertwine. Manon, separated from her coven, discovers truths about herself and her fate forced into one moment where a decision must be chosen: born or made? Dorian, separated from his kingdom, faces the truth in his veins as he slides one foot toward healing and takes a stance on the future he’d die for. Aedion meets his father by blood, Lysandra pledges an oath for how far she’ll go for Terrasen, Rowan crosses paths with some of his old cadre and the risks their interference or aid might bring, and Elide… Sweet, fierce Elide travels with a fae warrior named Lorcan and with each step of their truce-enforced journey does her hope threaten to shift the tides Maeve has spilled blood to ensure.

Yes, all of what I just wrote was super vague haha but I refuse to flat-out spoil things for you because OH MY GOSH IT’S SO GOOD. A thousand and one twists and surprises and I’m positive Aelin isn’t finished. Some of the feats she manages to pull off had me slack-jawed and cheering with pride but the ending…the ending had me on the verge of outraged tears. Truly the ending of this book is so impressive I wanted to stand up and applaud and so heartbreaking that I could’ve wept. I think I need the diversion of often annoying Chaol and his trials to distract me enough to pull myself together and face the final book in the Throne of Glass series. It’s going to be damn good, I can tell.

If you’re reading this post then there’s a very good chance you’ve already read the series and are just here for curious entertainment, but if you haven’t yet read this series then what the hell are you doing???? Not once while I witnessed each book’s release did I honestly consider the possibility of it being worth sticking around for however many books Maas decided to drag it out, but the fool is me because when I finally succumbed to curiosity book one caught my interest, book two sealed my fate, and each book since has further carved this series as a forever favorite on my shelves. I like what I like and I’m happy to have been surprised by Aelin: Fae, Queen, Assassin.