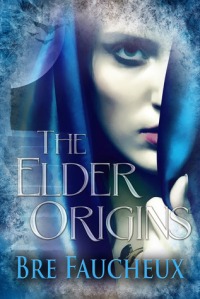 “The 14th century. The Hundred Years War. The Black Death. The Beginning of Vampires.

Madison’s home has been destroyed by a deadly attack by the French army. She has no choice but to follow her brother Jamison to the New World in search of new lands untouched by war, famine, and disease.

One problem. The Native Americans foresaw the coming of the white man long before they ever arrived. And they have no intentions of letting Europeans discover their lands.

Bre Faucheux’s exciting novella series, THE ELDER ORIGINS is a historical fantasy with sinister blends of medieval warfare, young love, Native American legend, and vampire lore that will excite anyone with a taste for the macabre and alternate versions of history.”
–Goodreads

Thank you to the author for submitting this series for review!

I. The Elder Origins

I must say Faucheux has both a fondness and a talent for interweaving history into her books. She’s quite adept at pulling from intriguing eras and legends and finding them quite compatible with whatever paranormal tale she has in mind.

Truly I find this story fascinating because it tells of the origins (to some extent) of vampires in North America and this is intriguing to read because often such paranormal stories take place in present day (i.e. Twilight or Vampire Diaries) but instead this is almost a prequel to such things explaining where the vampires came from, their story, their beginnings, and their role within our known history. Do I tend to lean more towards fantasy than to paranormal books? Yes. But this is so different that I find myself drawn in waiting for each coming page.

Beginning in an English village attacked by the French, Madison is whisked away by her brother, Jamison, as they ride for safety and deliver themselves upon a ship headed across the Atlantic. Full of hope and excitement Jamison believes the horrors of their past life can be left in Europe and look to this new land for a peaceful fresh start. Well they do indeed receive a new life but peaceful it is not. Poisoned by the natives the crew become ill as their bodies begin to undergo a terrifying transformation escalating their story and launching Madison off alone into the wilderness running to survive…

Everyone has been poisoned, massacred, or left for dead leaving only Madison and Jayden to fend for their selves in this strange and new world.

It is interesting to witness the developing relationship between Madison and Jayden as they explore and hone their new abilities as well as discuss their future. With each passing day they grow stronger and learn more about what they have become. While at first they were blood-thirsty beasts they have found peace with a Sioux tribe and steadily gain control over their ruling thirst.

While North America has sheltered them for months they find themselves once more wishing to return to their origins in England and carve out a new life there. But one thing they must quickly agree upon is to never attempt creating another like their self. Madison may crave company for she has lost so many, but Jayden knows that without the native Healer to calm them only bloodshed and chaos could ensue.

Washing ashore upon Ireland’s coast and heaving with thirst, Madison and Jayden quickly find themselves justifying their meals and hunting thieves for sport as they journey to London under guise of a ravaging plague, but they are not as alone as they originally believed…

Following the bloody trail left by two crewmen, Lyndon and Caspar, whom were once believed to be dead, Madison and Jayden trek quickly across Europe anxious to be reuinited. What strikes them as particularly peculiar is Lyndon’s apparent stash of “posies” that seem to protect its holders from the brutal plague spread mercilessly by Caspar.

Madison and Jayden chase down fellow vampires discovering the true depths of betrayal and brutality on the way. Determined to stop the slaughter of innocent people tricks and traps are laid and a burning pyre awaits. But not all is dire for wholly unexpected aid turn up just in time…

In other matters Jayden and Madison’s attraction for one another continues to grow. While in the first book they were practically strangers, Jayden’s arrogance being particularly irritating to Madison, in book two their shared experiences slowly deepened something within Jayden while Madison remained only on the fringe of awareness for his feelings towards her. In this final installment, however, it becomes increasingly obvious (albeit in a rather disturbing way) that Jayden has quite a definite attraction for Madison as he chooses victims that are similar to Madison in appearance and is sure to be very careful and gentle with them while feeding even getting a satisfied sort of glee whenever Madison is watching. By the end of the series though, one finds themselves rather happy that they have each other.

This novella series is quite interesting and very different from what I’ve read before. More of a long epic journey than a quick action-packed explosion but its original ideas tie intriguingly with the vague strands of human history in a way that keeps its readers hooked from start to finish. The Elder Origins is an imaginative story of the origin of vampires and their place in our world. Filled with legend, myth, history, and mysticism this series is sure to enthrall.

I wrote THE ELDER ORIGINS and THE KEEPER’S REALM. I love Florence + the Machine, Southern Comfort, Spaghetti, and Blue Bell Homemade Vanilla Ice Cream.
This has been my bio.
-Goodreads