Blurb:
Clytie, a Valkyrie, finds herself questioning Odin’s orders when Psyche comes for a shape-shifting panther, Storm. He rescues Clytie from a giant and something inside her changes. A spark ignites, triggering an emotion Valkyries are forbidden to experience. Following her new feelings, Clytie turns her back on all she knows to be with Storm. She knows it’s only a matter of time before Odin puts a price on their heads.
Odin furious with his Valkyrie for disobeying him, and proving the Well right, accepts the War is coming and Clytie will be the goddess who dethrones him, unless her sister stops her first.
Publication date will be September 27, 2016
Size: 6×9
200 pages
Trade paperback
Price: $9.99

Tonya Coffey lives in southern Kentucky with her husband and two teen boys. If she isn’t reading a fantasy novel with lots of action, you will find her sitting in front of a canvas painting the landscape which is so abundant around her home.
Website: http://coffeytonya.wixsite.com/tonya-coffey
Facebook: http://Facebook.com/coffeytonya
Goodreads: https://www.goodreads.com/author/show/8521742.Tonya_Coffey
Tonya’s Books: https://www.amazon.com/Tonya-Coffey

While you’re waiting for the release of Rogue, why not check out some of Tonya’s other stories? They’re filled with fantasy, magical realms, romance, danger, and daring, so don’t miss out! 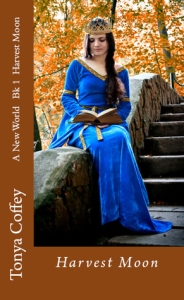 Seventeen-year-old Jessa lives in the remote mountains of Kentucky and has always found peace in the forest. Close to her eighteenth birthday, her dad buys her a book and things begin to happen. With her dreams leading her, she uncovers a world within her own with Faeries. They look and act like people she grew up with but she quickly finds she is the one who is different. She is the hidden heir to the throne and the Faeries need her to come home and save them from the Trolls.
If it wasn’t difficult enough for Jessa to move to a different world, she has to marry the man who saved her from the Trolls when all she wants to do is run to his best friend, Micha. With so much to worry about, how can she keep the Faery realm from falling into the hands of the evil Trolls and the Ancients?

Jessa, the queen of Faeries, finds herself in the midst of disappearances. When she investigates those who have vanished, she discovers a rogue Sylph. He is ridding the realm of the ones he believes are diseased with the help of Trolls.
Together, Micha and Jessa discover their bloodline is more than they thought. They are the descendants of Ancients and Sylphs making them the true Elementals. The very people the Sylph is wanting rid of.
If it wasn’t enough, trying to protect her people, Jessa is forced to let Micha go. She pushes him to go to the Ancients where he will be safe from the Sylph’s wrath.
When Jessa is convicted of meddling in the Sylph,s business, she is sentenced to death. Micha, accepting his new role as the Ancient king, wields their power and frees Jessa from the clutches of the Executioners.
Will Micha and Jessa save the Elementals, and themselves, or will the Sylph take control of the realms?